The Rev. Sandra Jones always longed to be a pastor’s wife.

“I knew the calling to be a pastor was hot and heavy on me but I didn’t want it,” Jones said. “But it didn’t work out the way I planned.”

The retired UVA Wise employee said her mission, both before and after becoming a pastor, has always been the same—bringing people of “all races, creeds and colors” together.

“It’s just something in me. I wish I could explain it, but it’s something I know I am supposed to do,” Jones said.

For decades, while in her community of Big Stone Gap, on UVA Wise’s campus and in the larger Southwest Virginia region, Jones has brought people together, uplifting them and ensuring the preservation of national, regional and local Black history and its enduring impact.

Now, she is honored as the inaugural recipient of the University of Virginia Memorial Benches Initiative on UVA Wise’s campus.

During Homecoming weekend, more than 100 friends, family, UVA staff and faculty crowded around the curved concrete bench overlooking the Plaza by the Lake and fountain to celebrate Jones’ continuing legacy.

“You are a woman of true conviction and wherewithal. You removed barriers. You overcame obstacles. You persevered.  You came here. You loved us and served us, and you left us better than you found us and, for that, we are so grateful and blessed,” said UVA Wise Chancellor Donna P. Henry, who shared her memories of Jones welcoming her when Henry first became chancellor.

UVA Wise kinesiology professor Bruce Wasem got his first look at the bench walking his dog before classes started.

“I thought the arc and half circle automatically makes you think you can talk to each other, and people sitting there can interact. On a straight bench two people have to lean and turn to each other. This bench is like Sandra with arms reaching in,” Wasem said. “She has definitely been a gift for our College and our community.”

The UVA Memorial Benches Initiative is a student-driven project by senior Sanjeev Kumar, who, as a sophomore, noticed the buildings on UVA’s campus inadequately reflected its student body’s diversity. He and his classmates developed the recognition concept.

“From this dedication forward, when you get to sit on the bench or walk around and see the bench in your daily lives, I challenge you to remember what it took for Sandra to make this College and campus community what it is today. Recognize the sacrifices, hardships and grit required to get to where we are today,” Kumar said. “I challenge you to find these gaps and don’t just accept the status quo. I challenge you to go find areas where you can make your community more inclusive and take those steps to make it happen.”

Memorial benches at seven of UVA’s colleges aim to raise awareness of underrepresented women and people of color who have made an impactful contribution to the university. UVA included UVA Wise in that mission and selected Jones for the eighth bench.

“Sanjeev was incredibly thoughtful to include UVA Wise in this project. In our first meeting, I thought he had a good plan to make a difference, and I wanted to help him succeed,” UVA Wise Vice Chancellor of Advancement and Alumni Engagement Valerie Lawson said. “I am thrilled to have played a small role in this well-deserved recognition of our beloved Sandra Jones, who has devoted her life to serving others. Her legacy will definitely live on at UVA Wise and in the lives of those she has touched.“

“To be honest I thought it was going to be a little metal bench. I was blown away when I saw it,” Jones said. “I feel so undeserving. I love doing stuff for other people. I don’t think of people doing stuff for me.” 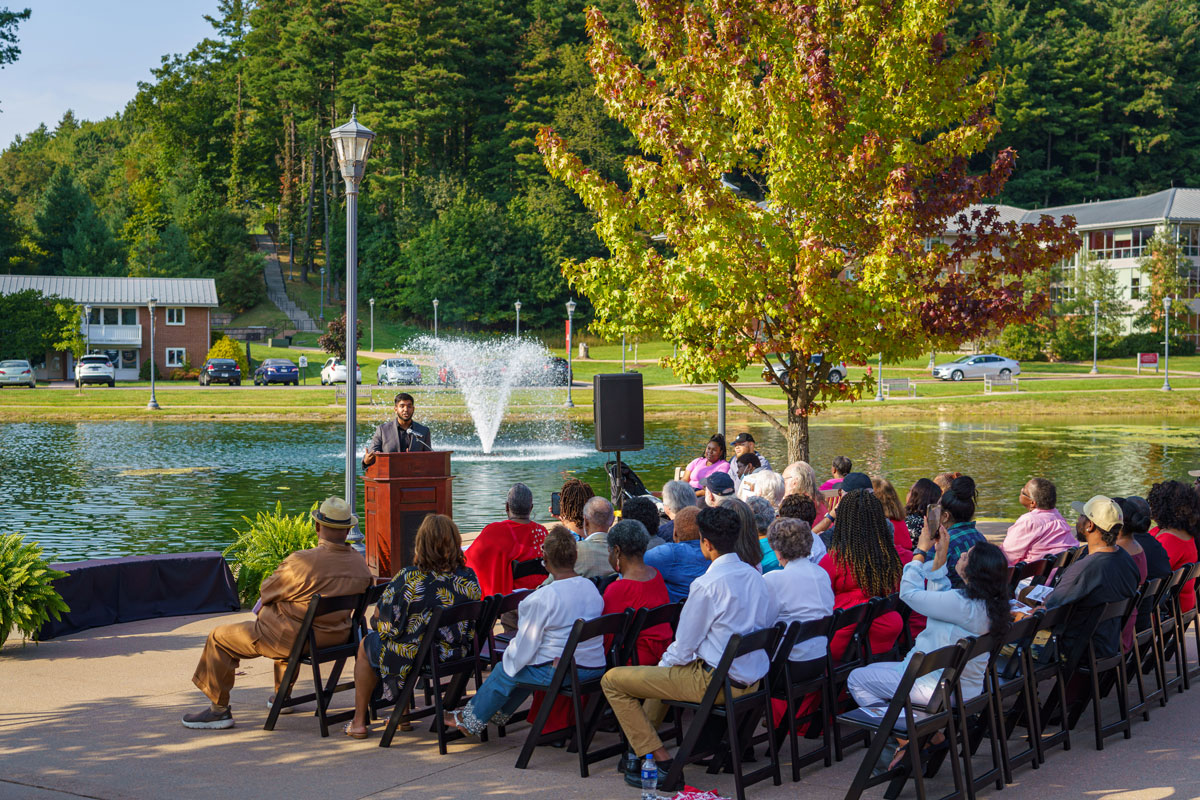 Full of good will and inclusion, that’s how Wasem describes Jones. Wasem has served with her on the College’s Black History Month Committee since its inception.

“She’s a quiet influencer. Her role of minister ties into everything she does,” Wasem said. “She exudes something that brings you in and gets you involved and makes you feel comfortable and at home. She is a natural born leader. She really is.”

Jones has been on a mission to build community for decades. Her impact has garnered many awards including the Movers and Shakers award from the Bristol Herald Courier, Appalachian Training Central and Brand (ATCB) Alumni Association Lifetime Achievement Award and Kingsport’s Sisterly Love Legends in White award as well as numerous honors from UVA Wise.

Before coming to the College, Jones worked for 17 years at  Westmoreland Coal Company while earning her associate’s degree in business from Mountain Empire Community College. In her free time, Jones chartered buses to take local kids to cultural experiences they otherwise wouldn’t had in Southwest Virginia—including traveling as far away as Atlanta for concerts like Bobby Brown, MC Hammer and LL Cool J.

She also has worked numerous jobs from McDonald’s to the Federal Aviation Administration. She’s cleaned homes, babysat, served at the Social Security Administration and wrote Black history commentaries for The Post.

“We’d go from church to church, and get all the churches to take part,” Jones said.

But the requests to become more involved continued, and eventually she became ordained in 1997 as deacon, then elder and circuit pastor—even pastoring three churches at once—Goode Temple in Lynch, Ky., Blackman Chapel in Norton, Va., and her home church, Williams Chapel A.M.E. in Big Stone Gap.

“I don’t think she has ever not had a full plate or overflowing plate,” Collie said. “She has been our guiding force and light.”

He considers her a close friend who has helped him through his personal losses in life.

“She’s had some difficult trials in her own life, but I’ve never seen her faith falter. That is one of her strengths. She can deal with her own personal hardships, and her faith is so strong that she is always looking for a positive outcome. She lifts us up and there is no problem too big to be tackled.”

After 10 years as an employee of the Southwest Virginia Public Education Consortium at UVA Wise, Jones transferred to the then-Office of Development as the assistant to the vice chancellor. There, she processed donations, ordered supplies, wrote thank you letters, planned lunches and served as secretary for the Foundation Board.

It’s during that time she worked down the hall from then-interim UVA Wise Chancellor Ernest Ern. Ern gave her a nickname that has stuck to this day—the “Chancellorette,” Wasem said.

“I love UVA Wise, and I’ve encouraged others to come to the college. It’s a wonderful place with wonderful people where you can get a great education. To me, it’s a close-knit community where people really care about you,” Jones said. “And they want the best for you. That is what it was like for me. I am very grateful.”

During her 22 years at the College, Jones served as chair of the Staff Council and advisor for the Multicultural Alliance, a student organization which is still running strong today.

Perhaps Jones is most known for her work on the Black History Month committee, which plans a series of themed events, including the annual Martin Luther King, Jr. March. The MLK March will celebrate its 27th year in 2023.

“We received some crazy letters from people who didn’t agree with what we were doing. It was kind of frightening, but we pursued it anyway,” said Jones.

In response, she galvanized her deep connections within the community and region for the event and Black History month programming.

“We tried our best to expand it. We felt it was so important for people to remember Dr. King for everything he did for our great nation and not just African Americans. When I retired, I didn’t want to leave work undone. I wanted to make sure it continued,” said Jones, who no longer chairs the committee but remains on it.

The candlelight march has continued through snow, rain and ice, added a beloved and highly attended dinner, and continued to grow with attendees from Kentucky and Tennessee.

“She is a force. She brings her beliefs, her ideas and people together. She made the MLK March grow and without her it might have disappeared,” Wasem said.

Jones’ own journey is part of the region’s black history. She attended the segregated African American school, James A. Bland Elementary and High School, in Big Stone Gap before being one of the first students to integrate locally at Powell Valley High School from which she graduated.

“I started integration in ‘65 and we were not called black here at that time. We were called colored or the n-word. We have come a long, long way,” Jones said.

Since 2019, Jones has been a vital member of the Wise County/City of Norton Community Remembrance Project coalition, which has documented three 20th century lynchings in Wise County with public memorials and state historic markers.

In 2020, Jones received a grant from the 400 Years of African-American History Commission to document stories from her Appalachian heritage. Now, she is compiling them into a book that, once finished, will be displayed Appalachian African Cultural Center at Pennington Gap.

“I don’t want people to forget how far we have come and the struggles. It didn’t just happen. Someone had to do some hard work, some even gave their lives for what we are enjoying today,” Jones said.

“It’s hard to imagine she has done all of this in one lifetime,” Collie said. “There’s enough accomplishments for several lifetimes and I know there is more to come.”

Personally, Jones said the bench comes as a much-needed blessing.

“My granddaughter has been having serious health problems and it was the medicine I needed now. This was something good. It has been wonderful and even helped her. She and my family are excited about it,” Jones said.

UVA has recognized seven alumni or alumni groups in the form of memorial concrete benches. For more information on other honorees, https://www.memorialbenchesinitiative.com.